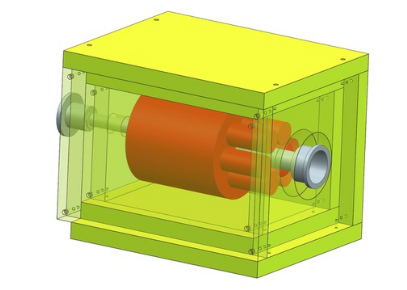 The 22Ne(α,γ)26Mg reaction (Q_value = 10615 keV) is the main competitor of the 22Ne(α,n)25Mg reaction (Q_value = - 478 keV). Both reactions are active in Asymptotic Giant Branch (AGB) stars (2 MSun < M < 10 MSun) and in massive stars (M > 10 Msun). Because of the negative Q_value of the 22Ne(α,n)25Mg reaction, the (α,γ) channel dominates at low temperatures. The temperature when the (α,n) channel becomes significant is a crucial parameter since this reaction is one of the neutron source for slow neutron capture (s-)process. This process is divided in weak (60 < A < 90) and main (A > 90) component. The latter is believed to take place in AGB stars, 100 < T < 380 MK where the 22Ne+α reaction competition has significant impact on branchings in the s-path. The weak component of s-isotopes is believed to be produced in massive stars during different evolutionary phases, the core He burning, the shell C burning and during the Super Novae (SNe) shock wave propagation. Indeed the competition between tha (α,γ) and (α,n) channels affects the neutron fluence during all phases.

In addition SNe are thought to be one of the production site of proton rich (p-)nuclei. For these currently there are high discrepancies from model prediction to observations and it is believed these are due to uncertainty in the s-seed, i.e. the s-nuclei, distribution.

Finally both channels produce Mg isotopes whose abundances data can be obtained by pre-solar grains analysis as well as from stellar spectra. Actually no good agreement is observed between model predictions and observations. Sensitivity studies proofed the discrepancy is due to the high uncertainty on the 22Ne+α reaction rate ratio and this can affect predictions for isotope abundances up to 31P isotopes.

The present experimental campaign represents the first tentative to directly detect the Eα = 334 keV resonance. The study was performed at LUNA 400 kV exploiting the significant background reduction guaranteed by the deep underground location of LUNA.

The measurement was performed exploiting the windowless gas target at LUNA400kV accelerator.

The 4He+ beam, Elab = 399 keV, was delivered to the scattering chamber, 4 mm thick and 100 mm long stainless steel cylinder, where the 22Ne gas, 99.9% isotopically enriched in 22Ne and 99.995% chemically pure, was maintained at a pressure of 1 mbar. The 22Ne gas was pumped out and guided to a recirculating system. A noble gas purifier guarantees the removal of impurities and then the 22Ne gas was re-used.

The beam stopped on a copper calorimeter which was also used to measure the beam current.

The gamma-ray detection system consisted of a 4π BGO borehole detector made of six optically independent segments. The independent signals can be combined offline to get the addback spectrum, as the BGO was a unique detector.

The measurement was performed in two campaigns in 2016 and 2019. During the second campaign, the detector was shielded against neutron background with a 10 thick box made of Borated (5%) Polyethylene in order to reduce this contribution in the spectra. This allows to reduce the upper limit on the resonance strength by one order of magnitude.