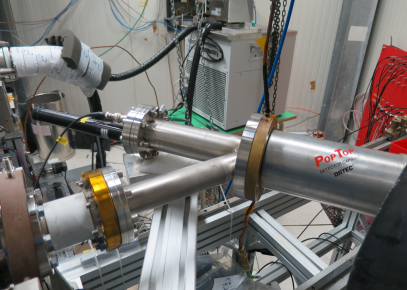 The 6Li(p,γ)7Be reaction takes part in Big Bang nucleosynthesis and in the early stages of stellar evolution. Its cross section has been much debated lately, especially since a recent observation of a broad resonance at center of mass energy of 195 keV. Such resonance would correspond to an excited state of 7Be which has never been observed before, nor supported by theoretical models.

The goal of the experiment performed at LUNA is to study the low-energy trend of the 6Li(p,γ)7Be  cross section and to investigate the existence of any low-energy resonances.

For the experiment, a proton beam was sent to different types of solid 6Li targets. The target baking was directly water cooled to limit target degradation. The detection system consisted in an HPGe detector with 104% relative efficiency mounted in close geometry at 55° from the beam direction and a silicon detector mounted at 125° used to detect charged particles from the competing reaction 6Li(p,α)3He, whose cross section is comparatively well known.